“Analysis of film content assumes two levels of meaning, one of which is manifest and one of which is hidden. The last carries the “real” meaning for the mass audience. This audience is presumed to intuit or in some manner become aware of the motifs in the film which satisfy and express its hidden needs. This seems to mean that the “unconscious” intuitions of the makers of films communicate to the “unconscious” minds of the mass audience” (Fearing, 1948, p. 173 ).

The above quote demonstrates the link between film and Freudian influence of the unconscious. Horror films serve to highlight unconscious fears, desires, and urges within it’s audience. These “hidden” themes are snaked into the film for the audience to soak in subliminal messaging. Part of this messaging is communicated through symbols, which translate certain connotations. 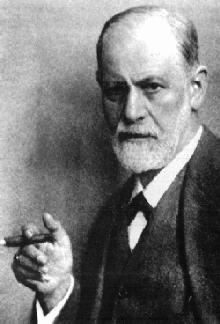 Sigmund Freud, featured to the left, was a very influential man in the realm of psychology. Much of his early work involved studying patients with hysterical symptoms, and trying to conclude how these hysterical symptoms and cognition’s manifested themselves. Hysteria would be a theme (along with other mental illnesses) depicted in early horror films to arouse fear of mental illness.

Freud’s theories about the unconscious, dreams, repression, mental illness, and psychosexual stages had a great impact on the population. His ideas gained a lot of momentum during the 1920’s, and can thus be seen in many of the earliest horror films, some of which are discussed in this site. His notion of the unconscious is one of the most prevalent idealogies expressed in the horror film – the idea of secret desires that lay hidden to us that drive our motivations. Repression, another theme commonly found in cinema, is when the individual locks traumatic memories inside. These memories can later resurface or be triggered by certain stimuli. For Freud, mental illness was usually a result of repressions that disrupted the process of infantile sexual development at some point in the psychosexual stages. This was the leading cause of neurosis. Trauma experienced during childhood was thus a leading cause of mental illness for the adult. In many of the featured films, neurotic behavior is prevalent in the “villains”, and heightened sexual awareness in the heroin (which Freud would argue was the result of repressed sexual desire – particularly notable in Nosferatu). The symbols of dream images, and the unconscious desires laden in dreams is another key element of Freud’s theories that will be discussed in the closer analysis of the films. “The similarity between dreaming and watching a film has been noted…apart from the coincidence of their birth and their intercourse with dreams, however, psychoanalysis and film also share certain important characteristics. Both are artifacts of the scientific and industrial age. Both are concerned with what the mind sees. Both treat time as highly malleable and the unconscious as timeless. Both are concerned with tangible reality – psychological and photographic – but both are also vitally concerned with the intangible” (Cocks, 2003, p. 38). 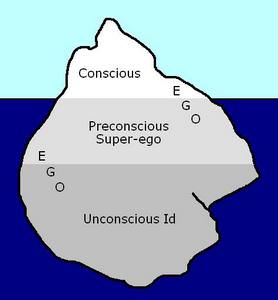 This image depicts the unconsciousness of the human mind, and thus it is the part of the iceberg that is submerged in water. The tip of the iceberg is our consciousness, and our superego and ego mediate the wants and desires of the id in a socially acceptable and moral way.

So, now that we have the basics of Freud down, lets look at how, in the big picture, all this stuff relates to film!

“Psychoanalysis and film were both born in 1895″ (Cocks, 2003, p. 35). Some of the first horror films were produced in the 1920′s. Many were influenced by German Expressionism, an expressionistic creative movement that took root in Germany during WWI and grew in popularity by the 1920′s. German film makers immigrated to Hollywood and had a profound effect on the development of American horror films, that began to implement the exaggerated angles, scenery, and interplay between light and dark to create films with a deeper psychological meaning and impact. This German Expressionism ideology was heavily influenced by Freud’s psychoanalytic theories, and thus much of all early horror film was impacted by his work. “A great deal of the sustaining interest in horror stories concerns the discovery of the  unknown.  The  majority  of  horror  stories  are,  to  a  significant extent, representations  of processes of discovery” (Carroll, 1990, p. 128). As Carroll notes, the discovery of the unknown, or “unconscious” is prevalent in horror cinema. Are you beginning to see how everything connects?

So, things to remember about Freud: Sex, Childhood, Dreams, Repression, and Unconscious. Let’s late a look at some films!

<–BACK TO EARLY HORROR

One Response to Freud and Psychoanalysis